@VoltageGoat are CQ & M1, two Cypherpunk Virtuosos whose ambition is to create the most legendary Bitcoin neon signs & live price tickers the blockchain will ever see. Their steampunk neon Nixie Tube tickers have become objects of extreme desire and now update Bitcoin’s price on a mesmerising second by second basis.

"We went to the neon graveyard in Las Vegas at night. It was all lit up and everything was freaking awesome!"

They got together around 3 years ago after CQ packed her life into a U-Haul van and drove up the West Coast to start a new chapter in the Pacific Northwest. They started with lunch and hanging out, then M1 showed CQ his Nixie tube clock collection and the rest is neon chemistry . . .

“Hear me out. How about we build a Bitcoin Nixie ticker?“

“Well, it would show the price of Bitcoin.”

CQ’s more into the aesthetics and early product design. She also does the CAD modelling & PCB development. M1 is the self confessed code monkey and focusses more on R&D and schematics. With their powers combined, you get VoltageGoat.

"We’re all suckered in by working for somebody 9 to 5 every day & it’s tragic. But Bitcoin’s giving people a real opportunity to be free in the future."

I spoke to CQ in vivid VR, her Manga eyes and Cypherpunk figure portraying plenty of emotional nuance and body language. She explained how she got started making neon Bitcoin sign designs in her parent’s basement back in 2009. When she came into the space there wasn’t really anything you could touch. She’s always been a very tangible person, who likes to touch and feel the fabric of things.

She was living in New York and her rabbit hole journey had just begun after discovering Bitcoin on PirateBay whilst searching for software hosting. In NYC at the time you could walk down any street and see neon in almost every window – Chinese & Vietnamese restaurants, Times Square – nothing but neon. People’s eyes are drawn to it, particularly the colour red.

"Walking around New York, seeing all the neon, the idea for a Bitcoin sign hit me. I posted a couple of mock ups on Reddit/BitcoinTalk & the community funded the first 2 batches."

This was the first generation ‘Bitcoin Accepted Here’ sign and it’s gone on to become a classic that VoltageGoat still sell today. The current version is a little smaller at 18 x 18 and it’s no longer hand blown but priced at only $299, it seems a total bargain for such an iconic design. “Blowing glass neons has turned into a lost art. It’s tragic that so few take the time to make them that way anymore. There’s so much finesse that goes into it.” 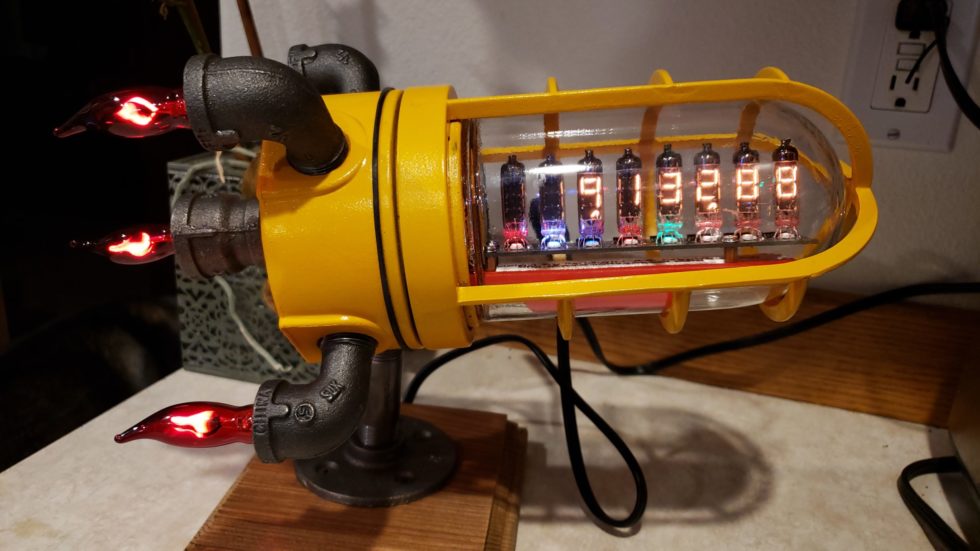 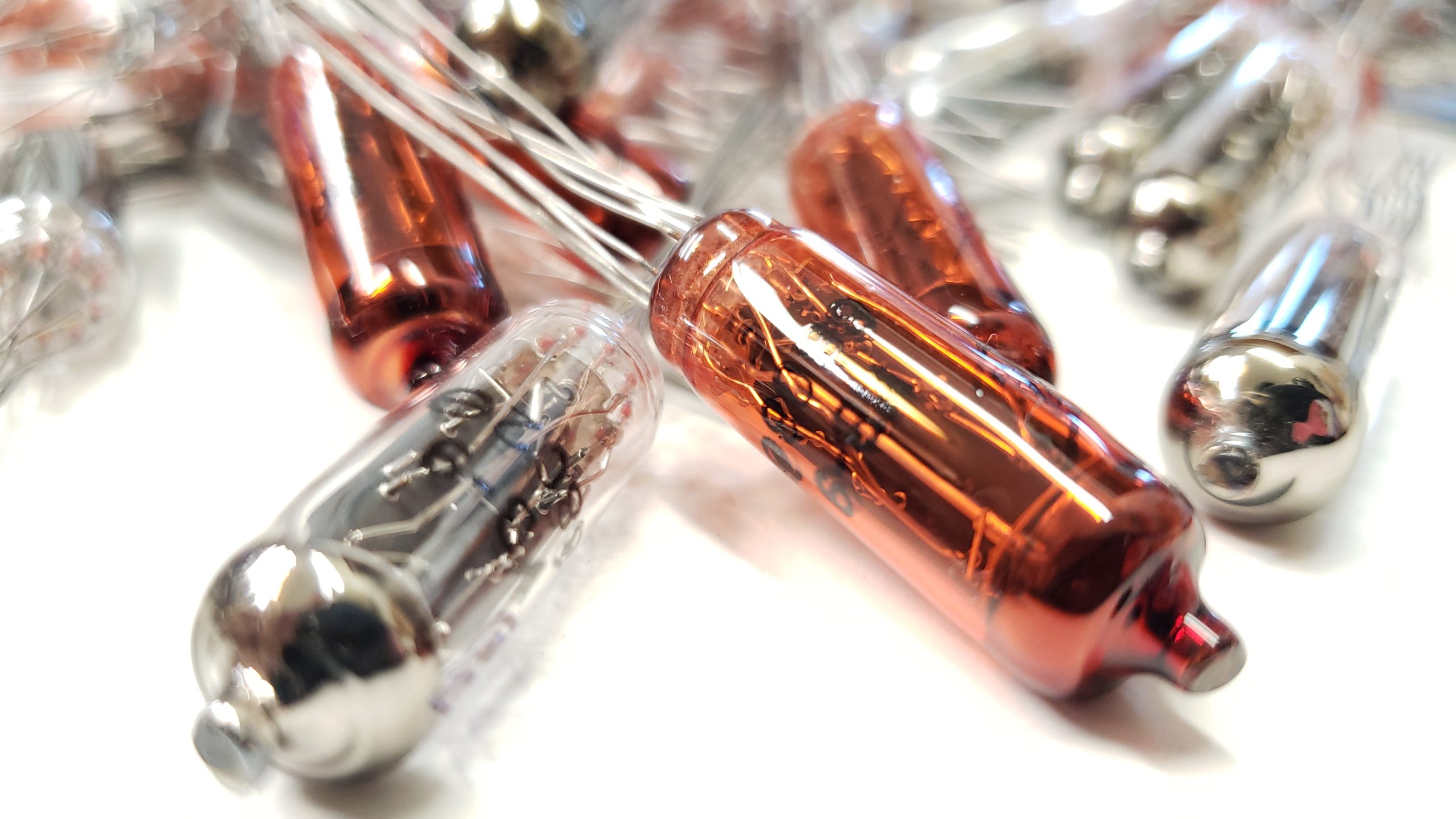 VoltageGoat’s Bitcoin tickers are uniquely based around Ukrainian or Russian neon valve tubes from 50s/60s submarines, calculators or War Rooms. They’re filled with real neon gas and epitomise Steampunk. These Nixie Tubes are repurposed with hand coded chips, boards and mounts, sanded and baked in the oven.

"We have some connections in the Ukraine and Russia, guys who go scouting for old electronics."

Each valve tube is filled with neon gas and made up of on different numeral layers, lined up on top of each other. The layers are separated by ceramics with pins that connect to VoltageGoat’s custom Arduino based boards. Depending on which pin is activated by the API, neon gas is attracted to that digit and it illuminates. Each valve tube’s colour depends upon both its constituent gas and coloured glass. Putting different tubes together and lighting them up, you get some really dope colour combinations. They used to have it so it update every couple of minutes but discovered that Binance has an API that updates every second – it’s compulsive viewing.

They’ve had to turn some orders off on the webstore because with just the two of them, it’s becoming a struggle to meet demand. They’re literally working out of a two car garage somewhere on the US West Coast right now. It sounds a little like those legendary early Mac days to me, with the two Steve’s working out the back of a garage. CQ still has a day job doing 3d animation/model design and VR/AR applications so there’s quite a lot to juggle.

"We really could use a small studio with a team at this point but it’s still just the two of us in a two car garage."

Sourcing the valve tubes can be a bottleneck and there’s also a huge lead time on chips, even car manufacturers are having trouble getting chips right now. Going through the middle of their second Bull Run has become pretty intense but they’re as committed as ever to quality. The Rockets take up the most time and involve stripping vinyl material from repurposed parts with industrial strength treatment they have to get suited up for, or risk third degree burns. They’re putting literal skin in the game plus heart and soul into their craft. 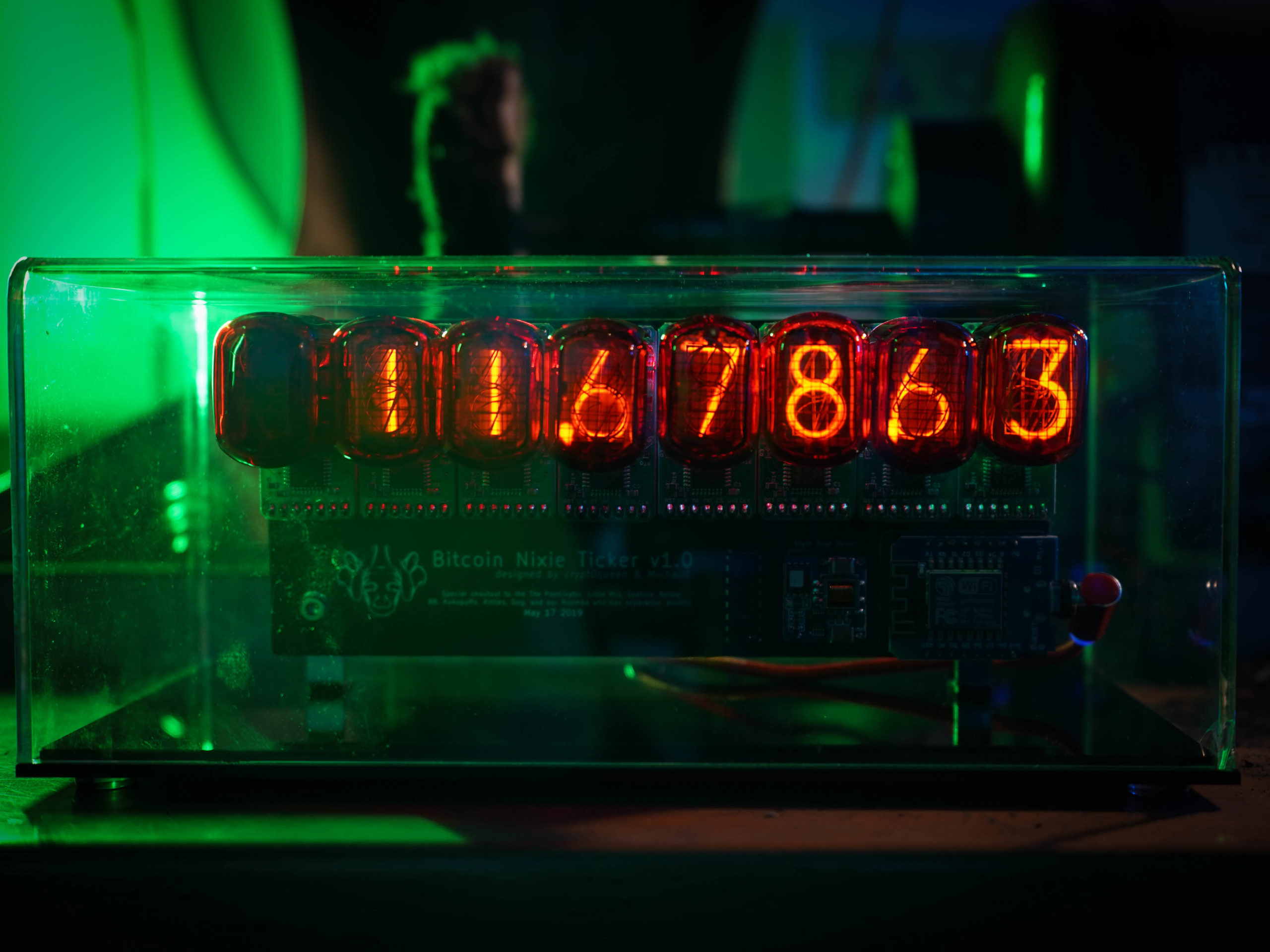 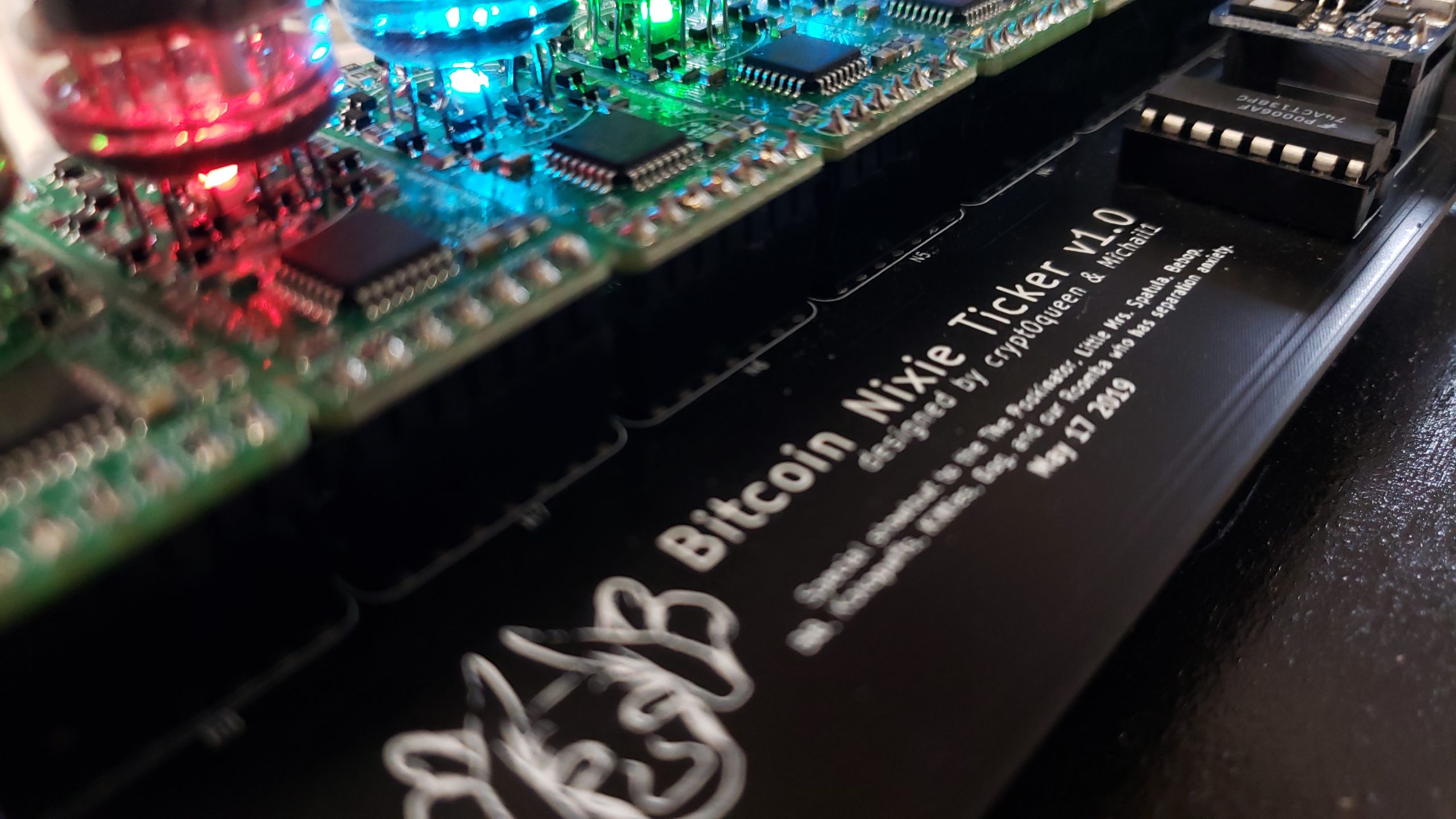 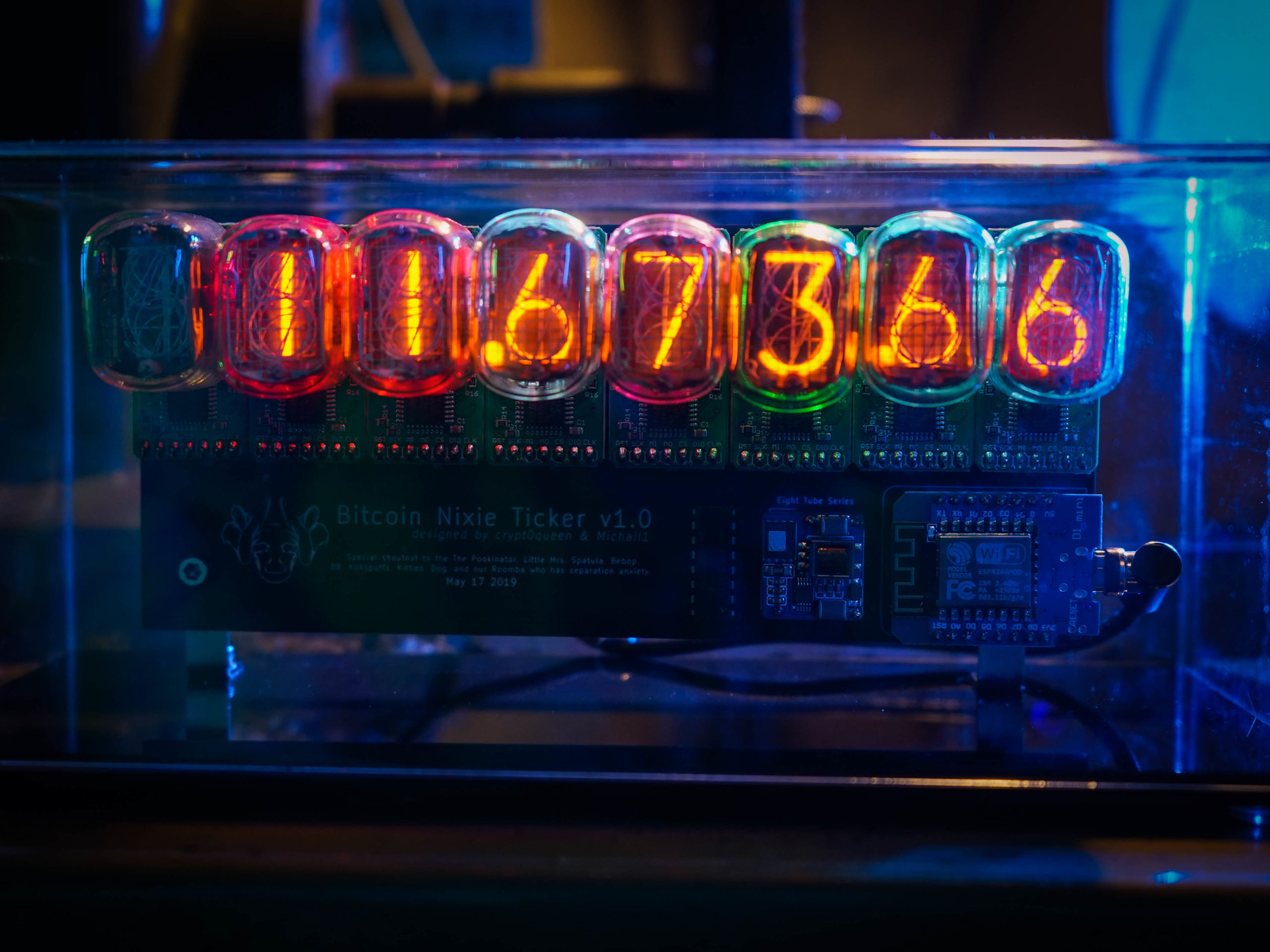 Before Bitcoin, CQ played massive multi player online games like World of Warcraft and collected rare mounts. When she’d go from zone to zone people asked, ”where the hell did you get that?” This sense of accomplishment got her feeling like an OG and tuned-in to the value of scarcity and digital assets.

"You withdraw $5K & the bank asks you what its for. I’ll never forget depositing $500 & being asked “where did this money come from?”"

“I think Bitcoin’s not just changed me, it changes the way everybody looks at inflation and self governance. Being able to control something that you own for once. A lot of people don’t feel they’re normally in control of anything! There’s nothing worse than being dictated to by something or somebody but with Bitcoin it’s like, Oh, hell, yeah, I can do this and you can’t do anything about it. All they care about is money, as long as there’s something to line their pockets for these pointless wars instead of funding education.”

Asking her take on the recent highs and lows in Bitcoin she tells me, “it’s just another day, all these new people freaking out right now. But when you’ve been watching this for nine years, you’re like Mr Bean on a rollercoaster.”

CQ’s clearly a very private person who doesn’t use Facebook and only uses Instagram for VoltageGoat business. She believes it’s important to not make your data available for people online. “I like to live off the grid. I’m not Jameson Lopp privacy but I don’t post pictures of myself online, where I am or who I’m with.” Part of this is about data privacy but there’s another more personal aspect she touches on that connected with me too . . .

"You’re always the villain in somebody else’s story, whether you want to be or not."

Like many of us she finds the prospect of a Chinese style Social Credit system based upon upvotes, downvotes and state compliance, utterly terrifying. “I don’t want any part of that.” She tells me all this through a hyper-real VR avatar with subtle facial expressions, body language and emotion and admits that all this allows her to tightly control the information she’s giving away. Cypherpunks will be Cypherpunks.

Despite being under considerable pressure with existing orders, they’re both passionate to keep new prototype ideas rolling. The next concept is a flip display, similar to NYC’s Grand Central flicking train display. They’re currently in prototype form and still really loud apparently. The current dilemma is how to put them in an enclosure and dampen the noise or perhaps just put a giant right Red flag on the site that’s states, “THIS IS LOUD!!!”

"We have to look at new things. otherwise, it’s the same thing over & over again, every day. And that’s the definition of crazy to us."

CQ’s final message is to encourage us all to keep creating and pushing forward through the insane times we’re in. “Even if you don’t feel you’re capable, just try something – take a piece of paper, get a canvas and throw stuff at it. It doesn’t have to be paint and it doesn’t have to be pretty. Just make something, create something and be free.”

"There’s no structure to Art. It’s OK if something doesn’t look like it’s supposed to. That’s called working as intended."