In November 2019, convicted criminal Usman Khan was attending a seminar in London that was intended to help him and other former inmates reintegrate into society. Unbeknownst to the organisers, he was carrying a knife – which he used to attack and kill two young assistants helping out at the event.

Fleeing the building, Khan ran through Borough Market and onto London Bridge. He was only stopped when a Polish chef named Łukasz overpowered him using one of the only weapons that were legally available to him – an ornamental narwhal tusk mounted to a display wall. After some passersby helped in subduing Khan, he was shot dead by police – the only group of people permitted to carry guns in public in the UK.

This is the state of things in the UK – a nation with such strict gun control laws that its citizens are compelled to borrow weapons from members of the animal kingdom when confronted with violent attacks.

You might be wondering whether these laws, which prevent the common man from owning a gun, actually prevent gun crime. Sadly not. There were nearly 2,000 recorded gun offences in the UK according to the Metropolitan Police’s own figures from 2019. I was even recently told by a London cabbie that it’s so easy to get hold of a gun in London’s East End now, there are both resale and rental markets thriving.

"If a terrorist wanted to, they could have gotten a liberator onto a plane for the last 10 years – nobody has."

So what do strict gun ownership laws actually do?

They make you dependent. They turn you into a potential victim. They deny you the chance to fightback on level terms and make you dependent on the State for help. They make it so that if you need to effectively defend yourself against forceful attacks on your person, you cannot. And when you call the police whilst being robbed, mugged or worse, you’d better hope that the guy who turns up isn’t Wayne Couzens – a Met Police officer sentenced last week to life in prison for the kidnap & murder of 33 year old Sarah Everard.

As anyone who has fully digested their orange pill will know, public institutions are failing. And with these failures, public trust is collapsing.

You see, when the baseline operating system of civil society – money – is broken, it is just a matter of time before everything else breaks too. And so it is no surprise to me that as we see the free market drive solutions to the money problem via Bitcoin, we see solutions to other problems caused by centralised failures emerging too.

As regular visitors to 21ism will know, Bitcoin has provided an incredibly effective and timely answer to the problem we face with our wealth-defences. But is there a similar solution available to help our self-defences too?

That’s what I wanted to find out from Suck Boy Tony – a former combat engineer who has gone back to college to further improve his engineering expertise, which he is now applying to the design and creation of guns and ammo – using a 3D printer at home.

A 3D printer on every bedside table

Speaking to Tony via video this month, I got the chance to enter the 3D printed gun rabbit hole to learn about this burgeoning trend. When Tony first entered the space a few years ago, there weren’t many folks operating in what was seen at the time as a slightly taboo hobby. Today, however, is a very different story.

"When I first got into this 3 years ago, the community wasn’t that big. Recently, though, it’s blown up."

As with other technology fields, 3D printing’s rise is being propelled by a combination of factors. For instance, Metcalfe’s Law is starting to kick in now within the networks of 3D printing enthusiasts – as people from every part of society design and print all sorts of items for themselves at home, workplaces, maker spaces, and even schools, driving significant growth in printer sales. These revenues of course then drive further investment in R&D, leading to further improved 3D printing capabilities which then lead to even more people coming into the space to make even better things – again benefiting everyone in a seemingly endless positive feedback loop.

The result? 3D printing is blossoming – becoming better, cheaper and much more widespread.

Despite the fact that the market is still in its early adopter phase and nowhere near maturity, Tony tells me that it’s now possible to print weapons at home using nothing more than a $200 Ender 3 MkII printer and $10 worth of filament. I don’t know how much guns are in the US but I know how much they are in the UK – “Error – price not found – item unavailable” (unless you know a plucky cabbie). Heck, you’d pay $200 for a single narwhal tusk – and that’s not even an original!

Not only that, but Tony’s applied engineering skills are producing some phenomenal new ideas that he and other designers are riffing on and perfecting using his open-source designs. For example, unhappy with dependency on metal firing pins for a number of reasons, Tony is pushing innovative electrical firing systems. Despite the fact that it’s not perfected yet, it’s something he sees as having great potential for users to have in the future, powered by nothing more than a few AA batteries. 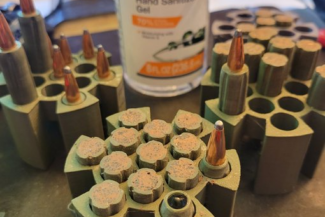 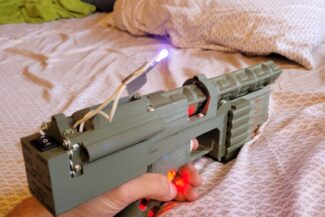 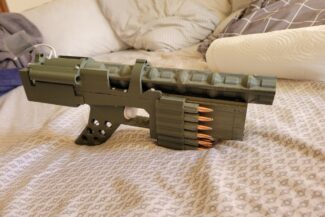 Unsurprisingly, this explosion in capabilities and the innovative blending of other DIY tinkering techniques by folks like Tony who use cheap, readily-available components are pushing the space and sovereign self-defences forward at a pace – with some enthusiasts now openly talking now about how resistance fighters in various territories across the world can use 3D printed weapons to oppose government tyranny.

I have to admit, being from the UK, it took me a long time to get my head around gun ownership and seeing 2A as a natural extension of our rights to self defence, autonomy and resistance to tyranny. Brits are taught from a very young age that the only legitimate claim to gun ownership and use is held by the State. But when you witness enough gross violations of natural law and the State often being incapable of preventing rising levels of crime or remedating them post hoc or even being responsible for these violations themselves, you start to question things. And then you learn that the single biggest cause of unnatural death in modern history isn’t viruses (even all of them combined), nor even war (again even with all combined) but, in fact, democide – AKA death at the hands of one’s own government. Veil. Drop.

"I’ve had a lot [of guns] blow up on me, but the key is failsafes. Despite clearing mines in the military, my worst injury came when a dog made me jump when I had my hands above my head and I dislocated my shoulder"

It's getting annoying spending all my time/money for weeks just to have it blow up. The test receiver for this design survived 25gr loads, I was using 16gr loads + extra reinforcement on this because I wanted to make sure it survived to display on my wall pic.twitter.com/ZhpWGl3iXY

Got arc ignition to work with smokeless powder! Thanks @RealSexyCyborg for the help!
Big things this means:
-No more need for primers/ easier reloads
-Can make under-barrel shotguns/launchers which are legally muzzle loaders and don't fall under the NFA
-Super-imposed rounds pic.twitter.com/XRo4eLM8po

All of the caseless ammo fired and seem to stabilize within the 10' to the target. Now that it's reliable I can design the full gun around this barrel pic.twitter.com/1q6GW2cymY

Whilst I appreciate that gun ownership and the right to self-defence are polarising subjects in some places, two things are clear to me. The first is that the free market always wins; it has a way of identifying problems and creating solutions to address them. The second is that sovereign-enabling, decentralised solutions to many problems are emerging and there is no putting that toothpaste back in the tube.

If you don’t like the idea of printing or owning a gun to be able to robustly defend yourself if and when you need it, sobeit – your choice. But with choice now seemingly an increasingly rare feature in our society, it’s liberating to know that – thanks to guys like Tony – you no longer need someone’s permission to defend yourself if you want to.

I, for one, am grateful for that.

Check out our audio interview above with Tony where we dive into what he’s making and how noobs can get started in this fascinating area of self-ownership.